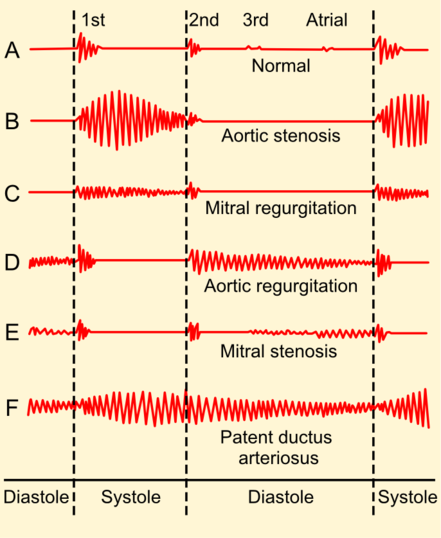 A heart murmur refers to an noise made by the heart by the flow of blood through the valves. In some cases, this can be a normal finding, and in others, it can indicate a serious problem.

To understand what makes a murmur, it is important to understand the valves of the heart.

The heart relies on valves to separate each of the chambers from each other. There are four valves in the heart; the aortic valve, pulmonary valve, mitral valve, and tricuspid valve.

It is important to note that although the presence of these sounds may indicate a problem, and suggest severity, the most accurate way to confirm these findings is with an echocardiogram. Having no noise at all also doesn’t mean there is no problem; they are just a useful indicator when the doctor performs the examination.

When we listen to murmurs using a stethoscope, we are trying to hear the length, the frequency, and the quality of the murmur. A murmur that sounds flat for the entire noise can suggest a different problem to one that becomes loud and then becomes soft again.

Have a listen to the video below, which explains what the murmurs sound like and what they could mean.

One thought on “What is a heart murmur?”